In this article I will be showing you how to get to next step, beyond the absolute beginner level to just the beginner level. I covered all the basics in a previous post, and now it’s time to take the next step.

The game is about to start, and you have all this about “opening theory” and that sort of carry-on. Well, no need to worry if you feel like the lack of opening knowledge will ruin the game for you:

Your opponent probably doesn’t know too much on the topic either!

(and if you’re facing a much better player, you’re probably not standing a chance either way, so the opening won’t be the reason you might fail to score…)

My point is that in whether it’s a live tournament or a game online, you are likely to be playing someone with somewhat the same rating as you. If you’re a complete beginner and don’t know much or anything when it comes to known opening theory, it’s quite likely that goes for your opponent as well.

You don’t need to know a lot of opening theory to play chess. In fact, you don’t need to know anything to play for fun! Or even to have a chance to win games! Personally, I’ve played a ton of games without knowing anything about the opening. But if you know something about how to play the opening, you will be able to get playable positions where you can win by outplaying your opponents.

So, let’s focus on a few general tips.

General tips in the opening

Now that you have (hopefully) reached a fully playable and probably somewhat equal position, it’s time for some middlegame tips.

Problem: What is white’s best move in the position in the diagram?

Hint: Try to make multiple threats in one move.

Leave your answer in the comments section!

First we have to define when the endgame starts, and quite frankly it is quite hard to put this into precise terms. The endgame usually starts after a series of captures, as the material on the board is substantially lower than in the middlegame.

Another way to see it, is when there is more maneuvering on the board, with less tactial possibilities. The middlegame can – and often will – contain strategic maneuvering as well, but with more pieces on the board, the chances of tactical blows will also be higher compared to the endgame.

What is important in the endgame?

Quite often one thing is more important in the endgame compared to the middle game:

You will more often than not need your king to both attack and defend in the endgame. This is not the case in the earlier stage of the game, as your main goal with king is protection. Now he’s an asset!

Just think of a pawn endgame: How would you win a position like the one diagrammed without using your king? Well, you wouldn’t… But if you do use your king, the position is easily won! 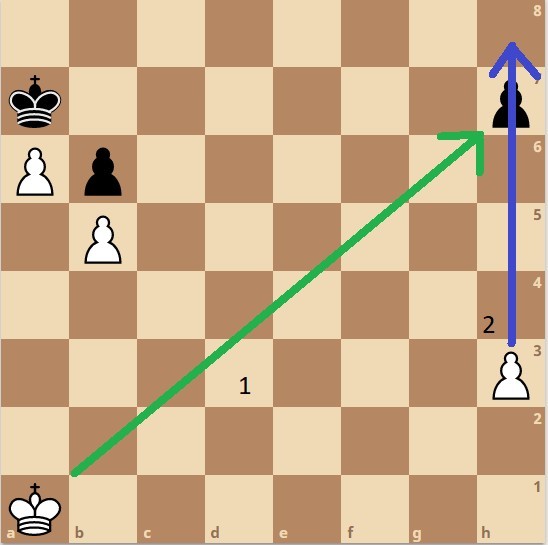 White’s plan would simply be to march up the board towards the h7-pawn, capture it, and then promote their own h-pawn. If the black king leaves white’s a-pawn to defend their own h-pawn, white will simply promote the a-pawn instead.

The point is that you need an active king in the endgame!

A game showing these principles in action

If you want to learn to play chess for beginners, go ahead and apply these principles. I’m sure this will do a lot to your game! Obviously you won’t just win every game, but this will lead to your game being sounder, and you will hopefully have fewer “pulling your hair out”-moments… :p

Let me know if these tips led to any good games, wins, interesting positions, or anything you would like to discuss!

Also, remember to leave the answer for the problem above… 😉